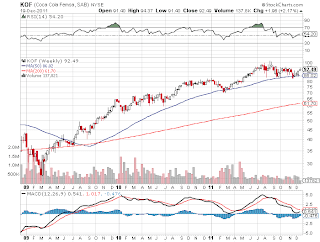 It’s been a rotten year for emerging market investors. While the S&P 500 is flat, the iShares MSCI Emerging Market ETF (NYSE:EEM) — the most popular way for investors to access emerging markets — is down over 15%.

For individual countries, it gets even worse. Brazilian stocks are down 22%, and Turkish stocks are a whopping 30% lower year-to-date. The best thing that most emerging market investors can say about 2011 is that it’ll soon be over.

But as we say goodbye to 2011, I recommend that investors give emerging markets a second look in the New Year. In a world in which the U.S., Europe and Japan are all buried under the weight of accumulated debts, emerging markets will be the only real source of growth in the years ahead. And most emerging market stock indexes trade at very modest valuations.

Indeed, 2012 is shaping up to be a year in which an investor can get both growth and value in an emerging market stock portfolio. Today I’m going to offer five solid candidates.

I’ll start with Chinese mobile telecom giant China Mobile (NYSE:CHL), which should be every investor’s dream stock. It has a dominant position providing an essential service — mobile phone service — to the largest population in the world. The company has over 600 million current subscribers, and in any given year its growth in new subscribers alone can be the size of the U.K.’s entire population. Stop and reread that last sentence a few times. It’s almost unfathomable. Now consider this: The combined populations of the U.S., Canada and Mexico would be 150 million people short of China Mobile’s existing subscriber base.

And yet it still has plenty of room for growth. In addition to reaching new subscribers who have never used a mobile phone, China Mobile will benefit for years from existing customers “trading up” to more lucrative contracts and data plans.

China Mobile trades for just 10 times earnings and pays nearly 4% in dividends. This is a company you can buy and hold for the next decade.

My next recommendation is also a major mobile telecom competitor: Turkcell Iletisim Hizmetleri AS (NYSE:TKC).

Turkcell is the dominant wireless carrier in Turkey with a 54% market share. And while mobile phones are ubiquitous in Turkey, the overall market is far from saturated. Penetration is at about two-thirds of the European average. And smartphones — with their lucrative data plans — represent only 10% of Turkish cell phone users. Plenty of room for growth here.

However, it’s been a rough year for Turkcell shareholders. Actually, it’s been a rough several years. The company’s share price is barely a third of its pre-crisis level, and earlier this year it came close to falling below its 2008 meltdown lows. The European debt fiasco and unrest in the Middle East, combined with unexpectedly high inflation, caused investors to flee the Turkish market, and Turkcell had a few issues of its own. The company skipped its dividend because of a distracting power struggle on the board of directors.

The board situation will get fixed soon. Still, life goes on, and Turkcell continues to grow and prosper. When the dividend payment is resumed, I expect it to be in the ballpark of 5%. In the meantime, investors can buy a piece of one of the finest emerging market telecom companies in existence trading for just 9 times expected 2012 earnings.

Let’s leave the telecom sector for the time being and move to something a little more appropriate for a raunchy New Year’s party: beer. The Brazilian brewer Ambev (NYSE:ABV) is the maker of many of South America’s most popular beer and soda brands: Brahma, Antarctica and Guarana Antarctica, among many, many others. Ambev is controlled by Anheuser-Busch InBev (NYSE:BUD), but it trades as a stand-alone company in both Brazil and in New York as an ADR.

There’s a lot to like about Ambev. It’s one of South America’s most successful companies, and it sells products that do well in both good times and bad. It’s also far less susceptible to the ups and downs of commodity prices than most of Brazil’s market. Not too surprisingly, Ambev is up over 10% year-to-date, versus a 20% decline for the Brazilian market as a whole.

I expect Brazilian stocks to do well in 2011. But whether they do or do not, I view Ambev as an attractive holding and a great way to get access to South America’s burgeoning middle class. Pick up shares of Ambev in 2012 and enjoy the 4.3% dividend.

While on the subject of all things fizzy, investors should also take a look at Mexico’s Coca-Cola Femsa (NYSE:KOF). Femsa produces, markets and distributes Coca-Cola products and other brands in Mexico and much of Latin America. (Mexico, by the way, drinks more Coke per capita than any country in the world, even the U.S. As a frequent visitor to Mexico, I understand. Coke goes phenomenally well with steak tacos.)

The investment case for Femsa is pretty straightforward. It sells a product with stable and growing demand to an emerging middle class in some of the fastest-expanding countries in the world. Though not exceptionally cheap at 16 times expected 2012 earnings, this is another company you can buy and spend very little time worrying about. And as an added sweetener, it pays a respectable (and growing) 2.2% dividend.

Finally, investors wanting to bet on the intersection of two macro trends — the continued march of globalization and rising living standards in Latin America — may want to consider shares of Chilean LAN Airlines (NYSE:LAN).

LAN is another South American success story. While U.S. airlines can’t seem to turn a profit — as the recent bankruptcy of American Airlines parent AMR vividly illustrates (NYSE:AMR) — many emerging market airlines don’t carry the burden of legacy costs that make their American rivals so uncompetitive. They tend to have young workforces without the bloated pension and benefit liabilities that sank AMR, and they have newer, more fuel-efficient jets. In 20 or 30 more years, LAN and its emerging market contemporaries may find themselves in a similar bind, but not in 2012. For the next several years, emerging market airlines like LAN should have very favorable tailwinds.

LAN trades at 16 times earnings and yields 2%. This isn’t “dirt cheap” by any stretch, but I do consider it an attractive price for a company with LAN’s promise.