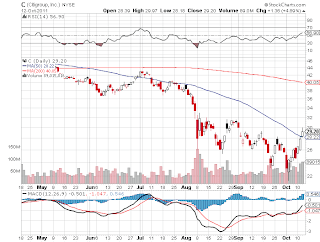 A recent study by consulting firm McKinsey, highlighted that most major downturns in the economy have been caused by "some sort of credit crisis." For financial firms, the resulting economic recession can lead to ruin. Firms with heavy debt loads or that were caught expanding too aggressively before a downturn, can also be ruined. Yet other firms simply succumb to intense industry competition, as occurs frequently in the technology industry.

Below is an overview of five firms that faced the above challenges and were nearly ruined by them, but ended up experiencing impressive comebacks.

Citigroup
Money center banking giant Citigroup got itself into severe trouble by investing in, what was described by the New York Times as, "securities that were created by financial engineers in the great wave of innovation." More than $300 billion in troubled loans on its balance sheet sent the stock down to a split-adjusted $15 per share, in early 2009 and required close to $50 billion from the government, to help it survive.

Citigroup remains fast at work to sell off its remaining bad assets. This soured book, which ended up being much larger than original estimates, is being referred to as Citi Holding assets and was most recently whittled down by another 34%, during the second quarter. The stock has recovered to $27 per share, though it was recently above $50 per share, prior to a recent round of market uncertainty.

American Express
Credit card firm American Express also saw its stock plummet at the height of the credit crisis. Its share price fell to nearly $10 per share in March 2009, on fears that soured credit card loans in its $75 billion loan portfolio would ruin its balance sheet. However, unlike Citigroup, AmEx remained firmly profitable throughout the downturn, even though charge-offs hit close to 10%.

AmEx's miscue was to increase its loan book too aggressively, prior to the credit crisis. It ended up accepting nearly $4 billion in government TARP funds, but looked to pay it back only a few months later. The stock has recovered to close to $50 per share and its credit card businesses have also experienced near complete recoveries.

Apple
Tech giant Apple Inc. has a storied history. The firm is relatively new by most corporate measures, having been founded in 1976. It is credited with being one of the first companies to introduce desktop computers and had a large market share in the early 1980s. Founder Steve Jobs left the firm in 1985 and the firm saw its market share steadily erode, as rival IBM and Windows-based computers slowly took over. Apple's market share fell from the double digits to less than 5% in 1996 and continued to dwindle into the 2000s.

Jobs returned in 1996, but it wasn't until the introduction of the iPod in 2001 that it started a stunning reversal of fortune. Apple's stock basically caught fire in 2003, rising from less than $8 per share to almost $400 per share, today. The iPod, and related iTunes store, revolutionized the music industry, as has the iPhone in mobile phones and iPad for tablet computers, for an impressive and lasting impact on three different segments of the technology industry.

Las Vegas Sands
Founded in 1998, casino giant Las Vegas is an even newer firm than Apple. Its flagship casino, the Venetian, opened in Las Vegas in 1999 and was followed by the Sands Macau in 2004; then came the Palazzo and Venetian Macau, in 2007. This aggressive building, which peaked just before the credit crisis, nearly ruined the firm. In 2007, capital spending reached nearly $4 billion, even though Las Vegas Sands reported an earnings loss and generated only about $128 million, from its existing operations.

Overbuilding and a hefty debt load sent the stock to under $2 per share in early 2009, as investors feared a bankruptcy filing. However, capital infusions from founder Sheldon Adelson and outside investors, and a ramping down of spending, ended up saving the company. Today, the firm is one of a few operators in Macau and has other growth ambitions in Asia. Its stock has recovered to more than $40 per share.

Sirius Satellite
Satellite radio leader, Sirius XM, also flirted with a bankruptcy filing a couple of years ago. The stock fell to 12 cents per share in January 2009, as losses mounted and fears grew, that a plummet in automotive demand (where most of Sirius's service stems from) would bring the company to financial ruin. A heavy debt load would have surely meant a trip into bankruptcy court, but media mogul John Malone ended up saving Sirius with a $530 million investment, in February 2009. The move gave his firm, Liberty Media, an estimated 40% stake and a fair amount of future capital for Sirius to rely on. Today, Sirius XM's stock is only at about $1.50 per share, but that is up more than ten times from its low.

The Bottom Line
Of the above examples, Apple's recovery stands out as the most impressive, as it didn't require a bailout or outside help to revive its fortunes. Overall, a desperate firm will take any path necessary to survive. Companies including Bear Stearns, Lehman Brothers, Sharper Image, and Palm Inc, weren't nearly as lucky.