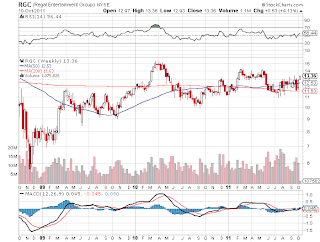 The adage on Wall Street about the movie industry is that it's recession proof. To that point, box office revenues did climb 10% in 2009. The global economy is under pressure and volatility is harrowing retail investors. Surprisingly, you can look to movie stocks for a reprieve.

Movie Industry Holding Strong
The growth of in-home entertainment (Internet, video games, Blu-ray players etc.) is the biggest threat to the movie industry. As more consumers upgrade to bigger flat screen televisions, newer video game consoles with greater functionality, tablets and other devices, the fear is that more of the potential moviegoer audience will opt to stay home for their entertainment. Yet, 2010 was a record-breaking year with the box office pulling in $10.56 billion and ticket receipts this year are near that level. The box office has earned $7.89 billion, compared to $8.21 billion by this point last year. Favorable comparables relative to a somewhat disappointing holiday gate last year, could make up the difference to put the movie industry back on a record setting pace.

Movie theater operators in particular, are having success capturing revenues from attendance growth and premium ticket pricing. Regal Entertainment Group (NYSE:RGC), the largest movie exhibitor in the U.S., estimates the increase in second quarter box office was due in part to higher ticket prices (about 15 to 17%). However, attendance gains were the primary driver of ticket revenues. That's a good sign for margins and the ability to grow earnings. Regal reeled in $34.8 million in profits last quarter, up from $4.8 million in the same period last year and revenues rose 4% to $753.3 million. Box office revenues were $519.3 million, while, admittedly overpriced, concession stand snacks contributed $200.2 million to the top line. Unemployment is above 9% in the U.S. and global asset prices are getting slammed, but people are still going to the movies in droves.

Blockbuster Dividends
Theater operator stocks are clearly benefiting from box office stability, trading with less volatility against the broad market. Since July 6, the S&P is down nearly 15%. Over that some period of time, Cinemark Holdings, Inc. (NYSE:CNK) is down almost half that amount, while Regal is actually up close to 5%. The real draw to movie stocks right now is reduced volatility. A big reason why, is star-studded dividend yields from this group. Regal features a fantastic 6.6% annual dividend yield and Cinemark pays 4.47%. These companies are producing more than sufficient cash flow to sustain the high payout. Regal generated $130 million in free cash flow during the second quarter, the second highest quarterly total in the last 4 years. Dividends may not seem exciting, but they can certainly be lucrative. (For related reading on dividends, see The Power Of Dividend Growth.)

These positive catalysts are in place for theater operators with big dividends. A momentum play off this group is RealD (NYSE:RLD), which licenses 3-D technologies. Some negative trading action against RealD, due to the move by Sony Corporation to charge theater operators for 3-D glasses, has made it a potential valuation play. Investors might also be able to find value in independent theater operators like Reading International, Inc. (Nasdaq:RDI) and The Marcus Corporation (NYSE:MCS), the latter of which pays a solid 3.2% dividend yield.

The Bottom Line
In addition to the stellar dividend yields, theater operators are in good shape to sustain attendance and concession revenues, thanks to several highly anticipated films still to hit the big screen this year, including eagerly awaited sequels, such as installments from the "Twilight," "Mission: Impossible" and "Sherlock Holmes" series. Theater operator investors are awaiting these titles, as well as what looks to be a hot forthcoming IPO issue from AMC Entertainment Inc.