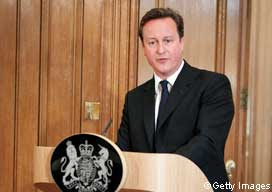 David Cameron has urged European leaders to take a “big bazooka” approach to resolving the eurozone crisis, warning they have just a matter of weeks to avert economic disaster.

The UK prime minister wants France and Germany to bury their differences and to adopt before the end of the year what he claims would be a decisive five-point plan to end the uncertainty, which was having a “chilling effect” on the world economy.

Meanwhile, on Sunday, Angela Merkel, the German chancellor, and France’s President Nicolas Sarkozy spelt out their determination to defend the stability of the euro as they met for a bilateral summit in Berlin, though they refused to spell out details of their plans.

Mr Sarkozy insisted that the two leading governments in the eurozone were pursuing a common course, and were ready to announce a comprehensive package before the summit of the G20 leading global economies in Cannes, France, at the beginning of November.

Mr Cameron’s interview with the Financial Times increases pressure on eurozone leaders to act, including pressing Mr Sarkozy to agree a plan of action for the recapitalisation of Europe’s banks.

Separately, Mr Cameron wants Germany and others to accept the “collective responsibility” of euro membership and to increase the firepower of the eurozone’s €440bn bailout fund to stop financial contagion spreading from Greece.

Although he refused to speculate on a Greek default – some British government ministers believe it is now inevitable – he said all uncertainty had to be removed about the country’s economic future.

He also called for the International Monetary Fund to be more active in “holding feet to the fire”, confronting eurozone leaders in the starkest terms possible with the consequences of further prevarication.

The final part of Mr Cameron’s plan is to address Europe’s underlying weaknesses, including deepening the single market and improving the governance of the eurozone, if necessary through treaty change.

“That’s the menu,” he said. “It’s not à la carte – you have to do the whole thing.” His comments reflect growing frustration in London and Washington at the incremental approach so far adopted in response to the crisis. “Time is short, the situation is precarious,” he said.

Mr Cameron believes it is vital that Europe’s leaders get ahead of the markets by announcing a comprehensive plan, comparing it to the “bazooka” approach once advocated by Hank Paulson, former US Treasury secretary.

He said Europe’s leaders must break the habit of doing “a bit too little, a bit too late” and conveyed the message in person over the weekend to Mrs Merkel.

Mr Cameron’s endorsement of new EU bank stress tests – applying market-based write-downs to sovereign debt holdings – is a tacit acknowledgement that Greece may not be able to meet the onerous terms of its austerity plan.

The tests could put new pressure on the British government to inject more capital into state-owned Royal Bank of Scotland, although Mr Cameron said he thought this would not be necessary.

He detected a French-inspired plot to discriminate against the City of London simply because it operates outside the eurozone. “I’m not having them trying to move our financial services industry to Frankfurt – forget it,” he said.
at 12:04 AM