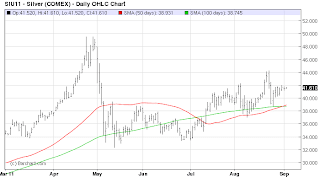 Silver is poised to form a so-called “golden cross” which may push the metal to a record $50 an ounce by October, according to technical analysis by brokerage GoldCore Ltd.

The attached chart shows silver’s 50-day moving average may be heading above the 100-day moving average. The golden cross, which occurs when a short-term trend line rises above a longer- term one, is viewed by some chart analysts as a bullish signal.

Silver for immediate delivery touched a record $49.79 on April 25 and traded at $41.561 by 5:49 a.m. in London today, taking its gain this year to 34 percent. It’s the best- performing main precious metal this year, beating global equities, commodities and Treasuries.

In technical analysis, investors and analysts study charts of trading patterns and prices to predict changes in a security, commodity, currency or index.