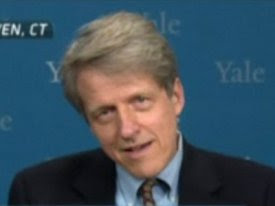 Recent housing and employment data suggests the U.S. economy is at a tipping point where a double-dip recession is possible and home prices could have much further to fall, a veteran economist said on Thursday.

Robert Shiller said the recent uptick in unemployment is not yet enough of a sign as to which way the recovery is heading. But if unemployment continues to rise in the coming months, it could suggest another recession.

"Whether we call it a double-dip or not, I think there is a risk," Shiller told Reuters Insider television in an interview.

Likewise, data showing U.S. home prices fell into a double dip in March could prove to be either a seasonal effect over the winter months or part of a downward trend.

"My gut feeling is we might see a continuation of the decline" in home prices, Shiller said earlier on Thursday at a Standard & Poor's housing summit.

He added that a 10 percent to 25 percent slump in real home prices "wouldn't surprise me at all," though he cautioned that was not a forecast.

A glut of houses for sale, ongoing foreclosures, tight credit and weak demand have kept the housing market on the ropes even as other areas of the economy start to recover.

Those headwinds have led the National Association of Home Builders to say the market will see no improvement this year.

"We now think single-family housing starts will probably be no better than they were in 2009, which basically tracked as the worst year on record," Jerry Howard, chief executive at NAHB, said during the summit.

Howard said their economists expect a slight uptick next year and a more robust housing market in 2013.

As for when home prices might bottom, Shiller told Insider that was unclear and it was possible prices could slide for 20 years.

"We've seen five years of decline already since the peak in 2006 and I don't see evidence that we're coming out of it," he said.

Shiller, known for warning about bubbles in the stock market and housing market, is also the co-founder of the S&P/Case-Shiller home price index. Last week the index showed single-family home prices in March slumped to lows not seen since March 2003, falling below the previous crisis-era bottom set in April 2009.

That report, along with other data, including grim jobs figures and a slowdown in manufacturing, suggested that the economic soft patch seen in the first quarter of the year could be more protracted.

Home prices had been supported last spring by a tax credit, but the housing market has struggled since the credit expired.

Speaking at a separate housing conference in Cleveland, Federal Reserve Vice Chair Janet Yellen said there was no quick fix.

"Looking forward, I unfortunately can envision no quick or easy solutions for the problems still afflicting the housing market," Yellen said. Even once the housing recovery takes hold, it will be "long and drawn-out", she said.

Nonetheless, she pointed to steps being taken to heal the market, including developing uniform national servicing standards, and giving banks incentives to participate in stabilizing communities.