Why Gold Above $15,000 Per Ounce By 2020 Is Realistic Without Hyperinflation

Today’s gold price of $1500+ is low…if I compare it to all other financial assets…[and if] I compare it to returns achieved since 1976 from the stock market and to the growth in US Federal liabilities. [Frankly, I can justify a price as high as $20,000 per troy ounce as early as 2020 and that is even without hyperinflation. Let me show you why.] Words: 1343

So says DoctoRx (www.dailycapitalist.com) in an article*which Lorimer Wilson, editor ofwww.munKNEE.com , has further edited ([ ]), abridged (…) and reformatted below for the sake of clarity and brevity to ensure a fast and easy read. Please note that this paragraph must be included in any article re-posting to avoid copyright infringement. DoctoRx goes on to say:

Gold has been vastly higher relative to other financial asset prices at times of extreme financial conditions in the past. Fund manager John Hathaway, an expert on gold, said in 2008:

“We calculate the market cap of all above ground gold, including central bank reserves, equals about 1.4% of global financial assets. In 1914 and 1982, when investor stress reached extreme readings, that percentage was between 20% to 25%.”

Assuming the 1.4% ratio Hathaway referred to in 2008 is now somewhat higher (perhaps 2% now), one can simply multiply gold’s price by 10 to get to a percentage of global financial assets that it had at times of crisis last century. That already gets one to around $15,000/ozt. today. (This analysis assumes other asset prices stay the same as they are now.) Allow low annual growth from there for 9 years and you get to $20,000/ozt. by 2020. Obviously of course no one expects gold to suddenly rise by ten times but over the months and years, strange things can happen. [$20,000/ozt. by 2020 is the highest estimated parabolic peak price put forth by 130 analysts identified in this (1) article.]

Gold traded at $140 per troy ounce [to understand the significance of the term "troy" read this(2) article] 35 years ago, shortly after it again became legal for American citizens to own it. If it had appreciated 9% annually since then, its price today would be $2,857/ozt. If it had risen as fast as the Dow Jones Industrial Average, which I place at 900 then with an estimated dividend yield over the years of 4%, then gold would today be at $7,302/ozt. If gold were to continue averaging a compounded price appreciation rate of 11.66% from the 1975-6 price of $140/ozt. until 2020, one gets $20,000 per troy ounce. 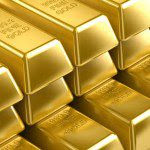 If you think any of this is extreme, or is but idle numerology, please think again. Our system of money is based on debt. The Federal government issues bonds, the primary dealers buy the bonds, and then the Federal Reserve Bank of New York creates base money out of thin air by purchasing the debt from the primary dealers. This is how electronic dollars are created, and these dollars can be turned into paper currency at the request of depositors. Our paper money is a “note”, meaning a debt, though in a circular fashion it is only redeemable in its own form, namely other notes (or coins). This distinction between paper money that is also a debt obligation versus something on the order of scrip that one might find (or have found) at a military PX is at the core of much debate and confusion, but that’s a topic for Econophile or others more knowledgeable than I.

Here are more numbers that I think prove the reasonableness of the above analysis.

The Federal debt was $635B in 1976. Since LBJ had already put Social Security revenues into the general fund and because Medicare had come into existence with unrealistic cost estimates, there were probably already other unfunded and unaccounted-for liabilities, so I’ll estimate a total Federal liability, both on- and off-budget, in 1976 of $1T. In contrast, recent estimates of on-budget debt and off-budget unfunded Federal liabilities are, per USA Today, over $50T. (This analysis uses dollars as they were valued at each date and are NOT adjusted for purchasing power inflation.)

One could go on almost ad infinitum. The bottom line is that if gold is, and remains, the monetary metal, as President Nixon signified 40 years ago when he chose to default on the U.S.’s Bretton Woods commitment in order to hold onto the remaining gold, then, assuming the government is going to take the usual statist path and meet its debt commitments by inflating them away, gold can be re-valued vastly higher without hyperinflation. (I am expecting high inflation in such a situation.)

In summary, a simple analysis of compound rates of return of assets such as the DJIA and, separately, the liabilities of the sole remaining monetary and military superpower, indicate that gold may well be substantially undervalued. Should times of true panic occur and gold be re-valued to an extreme level as has occurred before (and after which the economic world in fact kept turning), prices in the $15,000-$20,000/ozt. range could become fair market prices simply by preference of investors, again without using hyper-inflated asset values as comparators.

None of this is a prediction. For all I know, governments will band together to demonetize gold and will enforce that decision by force. Or gold will simply sink in price for any set of reasons, or from a “random walk”. If one is going to do as I have done, however, and allocate a significant percentage of one’s savings to gold-related investments, it is nice to believe that there is substantial real upside, not merely that of keeping up with price inflation. More importantly, the above numbers demonstrate the point that financial theorists know, which is that while buying “right” is important in the short term, buying the right asset at around a reasonable market price for the long term is the most important thing.

I believe that per the above calculations, a sound case exists that gold may appreciate substantially over the long term relative to other goods and services. This potential appreciation has nothing to do with it as a commodity, in which case I would perform no such analysis. It is because gold continues to be what it has been for many years – a store of wealth – that I feel it is reasonable to think about it in this manner.

There are certain things that have absolutely no equivalents or substitutes. There is only one United States of America with its dollar, “backed” by the full faith and credit of the Federal government. As of June 2011, there is exactly one generally-accepted monetary metal: gold.

I think that people who buy their goods and services with dollars and who have dollar-based savings should think deeply about the possibilities for the key financial ratio of the future, namely that between the two most important and most different moneys of the world, gold and US dollars…