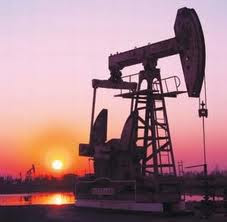 Oil extended its retreat from 32-month peaks reached early on Monday, with U.S. crude's 5.8 percent drop from Friday the biggest two-day percentage loss since May 2010, when the Greek and wider euro zonedebt crises pressured commodities.

Oil led a broad commodities slump that also reacted to an upgrade in the severity of Japan's nuclear crisis, which rattled risk appetite and boosted U.S. Treasuries.

"Fear of demand destruction is killing this market. There is a feeling that the recent rally lifted oil prices to unsustainable levels," said Phil Flynn, analyst at PFGBest Research in Chicago.

Sentiment was also diminished after two Saudi Arabia-based sources told Reuters that a lack of customer demand caused the kingdom to lower production after an increase in March to offset lost Libyan crude.

U.S. oil prices rallied above $113 on Monday, having jumped from an $83.85 low on February 15 in the wake of the ouster of Egypt's government and with unrest just beginning to spread in the region before engulfing Libya in a civil war.

In its second report in as many days, Goldman Sachs (GS.N) urged investors to book profits, and traders said many did.

Goldman expects Brent to fall toward $105 in coming months, the bank said in a note emailed to clients, after recommending on Monday that they close its trade on a basket of commodities that included U.S. crude.

Crude prices were little changed in post-settlement trading after the API report.