I often bemoan how so many of the rules those of us in the market pre 2009 had learned, have become useless in the new paradigm Fed supported era. One of the most flagrant is the concept that healthy moves up should be supported by volume expansion - frankly that is a bedrock concept in the technical analysis community. This rule has been obliterated during the past few years. Ritholtz over at the Big Picture flagged this amazing graph via Bloomberg that cross references the advance in the S&P 500 with volume. As they say a picture says a thousand words.... volumes have fallen by some 40% in stair step fashion since the market bottom in spring 2009, yet the markets go up almost non stop. Remarkable.

If current trends persist I assume when the S&P hits 2500, there will be 100 shares trading a day? 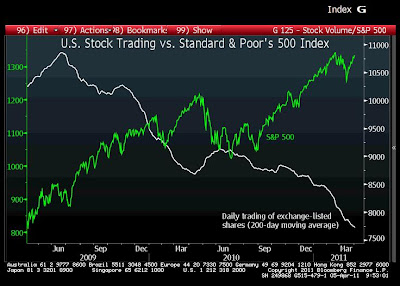