The world's greatest silver stock could soon be even better 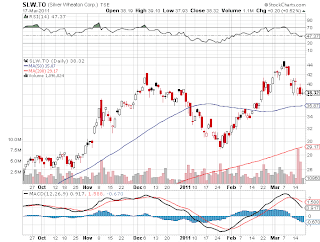 With silver prices expected to continue to rise over the next few years, Silver Wheaton (SLW.TO: Quote) sees the possibility of paying out around half its cash flow each year in dividends, its chief executive said.

"I don't see any reason why in the future we couldn't be paying out 40, 50 or 60 percent of our cash flow every year in dividends," Peter Barnes said in an interview with Reuters on the sidelines of the PDAC prospectors and developers conference.

"If we can take this company to cash flows of $2 billion or $3 billion a year," he added. "It'll be tough to spend that amount of money on new deals all the time."

Silver Wheaton expects to have over $700 million in cash flows this year. Even if the company doesn't do a single new deal, it will grow 80 percent over the next five years, said Barnes.

The Vancouver-based company pays cash upfront to mining companies in exchange for future silver offtake. It has seen its shares more than double in the last twelve months.

"Until now, we've been a pure growth story and investors have really liked it," said Barnes. "I think now we're becoming growth and yield, and I think investors are going to like it even more."

With cash costs of just $4 an ounce, and spot silver near 31-year highs at $35 an ounce, Silver Wheaton is reaping the benefits of soaring metal prices and Barnes doesn't see that changing any time soon.

"I think silver is going through $50 in the next two or three years," he said. "Therefore, our cash flows are going to continue to do very well."

With silver prices high, it would seem logical that miners would want to keep the silver offtake from their mines, and turn to the debt and equity markets for financing instead.

Not so, said Barnes.

"We're getting a lot more opportunities now to do more deals than we've ever had before," he said.

"If you look at what makes the most sense for a company, nine times out of 10, streaming makes more sense," he added. "Its less risky."

When a company issues shares, it dilutes the value for each shareholder. If a company takes out debt, then it is stuck with high interest payments and could be in trouble if the metal market collapses.

Silver Wheaton is also attractive to smaller mining companies because it pays out cash now for silver from projects that won't be in production for another few years.

"Just because the silver price is $35 now doesn't mean its staying there for 50 years," said Barnes. "At some stage, it's going to go down, just as quickly as it has gone up."

Because of that volatility, Barnes said that Silver Wheaton will never pay more than $4 an ounce for offtake.

"They're obviously wanting a lot more money up front than when we were doing deals while the silver price was $16," said Barnes. "The focus isn't on the $4 an ounce, its on the upfront payments."

And while growth remains important, Barnes said the company will focus on quality deals over quantity.

"Every deal looks good when gold and silver prices are where they are now," said Barnes. "But they're not going to be around these levels forever." (Reporting by Julie Gordon; editing by Rob Wilson)