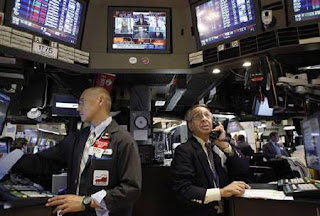 U.S. stocks rose on Monday on strong earnings and signs of a strengthening economy, even as a surge in the price of oil highlighted the potential for increased political risk in the Middle East to upset markets.

Egyptian Vice President Omar Suleiman said on Monday that President Hosni Mubarak has asked him to start a dialogue with all political forces, while Egypt's armed forces pledged not to fire on peaceful demonstrators.

"It's creating a great opportunity to step up and increase exposure to emerging markets and other areas of the international markets," said Robert Lutts, president and chief investment officer at Cabot Money Management in Salem, Massachusetts. "I'm optimistic that this will be resolved and blow over."

Relief that the turmoil appeared not to be escalating allowed investors to focus on data showing stronger U.S. personal spending and regional manufacturing, while better-than-expected earnings from Exxon Mobil Corp sent the company's shares up more than 2 percent. (more)
at 12:06 AM