Hedge Funds May Be About To Trigger A U.S. Dollar Collapse 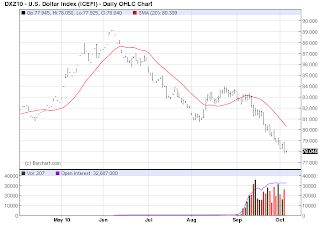 Hedge funds may have been to blame for the flash crash in May, and perhaps there is an even darker hidden danger lurking. I think that global macro funds are trading against the dollar and it is worrisome to imagine the avalanche that could happen.

How plausible is it that hedge fund stress could trigger a straight up USD collapse? For these four reasons, our currency may be hanging in a more delicate balance than we realize.

* Ballooning trillions of national debt will be cheaper to pay by switching on the printing press and manufacturing money from air. It’s likely that our national government will contemplate this approach when it comes time to pay the piper. Attempting to mend systematic problems in our economy would be useless at this point. Devaluation would certainly be an easier solution although living in the 2010 version of Weimar Germany may be a lifestyle change for all of us.
* The shine of the USD, formerly the most popular currency in the world, is dulling. China has become disoriented and already tried to replace our dollar with an international reserve currency. They’ve already started dumping our Treasuries and buying gold.
On the other hand, it is not feasible that the world powers would want to demolish a key trading partner. Further, no new kid on the block has stepped up despite the world’s disenchantment with the greenback’s lost glimmer. (more)
at 12:20 AM