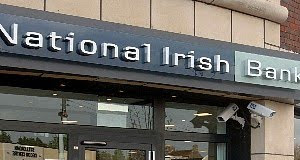 One of the country's larger banks has told to its customers that it is to stop handling cash in its branches.

National Irish Bank says it is moving to a Scandinavian model of "cashless banking" - with an increased reliance on ATMs and debit cards.

NIB has told customers that its branches will no longer handle cash withdrawals or lodgements, nightsafe lodgements or foreign exchange cash.

They are instead urging customers to use ATMs or get cash back on their laser cards if they need notes. Branches will continue to accept cheques and postal orders.

The bank says the idea of "cashless banking" will be rolled out over the next 18 months, and that the model is that used by its Danish parent company.

NIB says Irish dependence on cash is amongst the highest in Europe.
at 3:29 AM