The Outlook for Oil 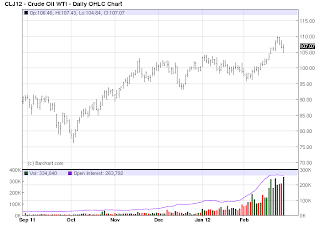 “Are we headed for another oil shock and if so what are the investment implications?” Many investors are asking these questions given recent developments in the Middle East and Africa.

Tensions have been escalating lately in the Middle East. Western countries have sought to contain Iran’s nuclear program by imposing new sanctions. Meanwhile, there’s a growing perception among market watchers that Israel has a dwindling window of time if it’s going to attempt any military action against Iran’s nuclear research. Elsewhere, the market has also had to contend with growing unrest in Nigeria, a country that produces two million barrels of oil daily.

As such, it’s easy to see why the price of crude is once again climbing and why investors are wondering about prices rising further.

So what could cause even higher prices? Should Israel attack Iran, it’s possible that Iran would at least attempt to prevent the passage of oil through the Strait of Hormuz, a narrow water way through which 20% of the world’s oil passes. If this happens, at least a temporary oil spike would probably occur. While it’s doubtful that Iran has the military capacity to close the Strait for any length of time, even an attempt would likely push oil north of $150 a barrel.

To be sure, it’s difficult to predict the odds of an Israeli strike and a major escalation in oil prices. But even in the absence of an attack, crude prices are likely to remain elevated for three reasons, supporting my view that investors should consider overweighting global energy companies through instruments like the iShares S&P Global Energy Sector Index Fund (NYSEARCA: IXC).

First, it appears that most emerging markets are likely to engineer a soft landing. This is important as virtually all new demand for energy is currently coming from emerging markets.

Second, while Saudi Arabia and OPEC have spare capacity, this capacity will be stretched if Iranian production slows or an oil embargo takes place. It would likely not be able to adequately cover replacing Iranian and Nigerian production, as well as production from other smaller Gulf countries also experiencing unrest.

In short, even without a military confrontation in the Gulf, I expect oil prices to remain high for the near term and I continue to advocate an overweight to global energy companies.