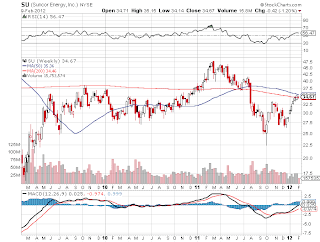 BP (NYSE:BP) just released its long-term energy outlook which suggests carbon emissions will increase by 28% by 2030. Along with that, renewable energy sources such as wind and solar will still only consist of less than 10% of the global energy output, even with increasing use in recent years. Accelerated emerging market growth especially from China and Brazil, leading to a 39% increase in global energy demand by 2030, will require a lot more imported foreign oil. China alone is forecasted to import 80% of its oil needs in the next 20 years. Europe will need to import 94% of its oil and 80% of its natural gas.

Energy Independence
The report goes on further, predicting that the United States could become energy independent during the same time period. Natural gas production is expected to rise from recent innovations in the gas field, known as fracking. The Keystone XL Pipeline, which would have delivered 700,000 barrels of oil per day from Canada to the U.S. refineries in the Gulf, has been delayed but another route is expected to be accepted. According to the U.S. Department of Energy, natural gas production has increased 11% from 2007 to 2010 and domestic crude oil production has increased to 5.7 million barrels per day, the highest it's been in eight years. Going back to natural gas, BP predicts that it will be the fastest growing fossil fuel by 2030, growing at 2.1% per year.

World Demand
Population and income will remain the key drivers of energy demand. The last 20 years saw the world population increase by 1.6 billion people, with population growth growing by 1.4 billion over the next 20 years. This rising demand is expected to be met by increased supply primarily from the Organization of Petroleum Exporting Countries (OPEC). Non-OPEC supply will also be expected to rise, with supply from the Americas expanding by 8 million barrels per day (Mb/d) as advances in drilling technologies, such as fracking, unlock resources in the Canadian oil sands (2 Mb/d), and U.S. shale oil (2.2 Mb/d). Shale gas and coal bed methane (CBM) will account for 63% of North American production by 2030.

Domestic Supply
Eagle Ford
With oil reserves estimated to be at 3 billion barrels, the Eagle Ford shale is expected to help make the U.S. the largest oil producer in the world. Investors wanting to invest in U.S. Energy Independence should look at Plains Exploration (NYSE:PXP), and EOG Resources (NYSE:EOG), two up-and-coming producers in the Eagle Shale. Plains Exploration currently produces 10,000 barrels of oil per day, with plans to increase production to 30,000 barrels of oil equivalent (BOE) per day by 2015. EOG Resources currently produces 53,000 BOE per day, 78% of that total comes from the Eagle Ford shale. (Before jumping into this hot sector, learn how these companies make their money.

Bakken Formation
Another huge shale is the Bakken Formation, found in the western U.S. Continental Resources Incorporated (NYSE:CLR) is the largest producer in this shale. Although it should be taken with a grain of salt, the CEO was on record stating that "the Bakken is the biggest hydrocarbon find in years ... basically doubles U.S. hydrocarbon reserves."

Oil Sands
Canada has the second highest oil reserves only to Saudi Arabia. With the growing demand for oil, the oil sands will supply an increasing amount to the U.S. Suncor (NYSE:SU) just reported its fourth quarter 2011 earnings and made $1.43 billion in net earnings. Cash flow from operations was $2.65 billion. With this amount of free cash flow it allows the company to make strategic moves in the oil sands sector. Its daily production is nothing to scoff at with 576,500 BOE/d in the fourth quarter. Its valuation to its peers looks cheap with a 13 P/E and a PEG ratio of 0.5. Looking forward, it's even better with a 9.2 forward P/E. Investors might want to take a look.

The Bottom Line
As emerging economies increase their energy use, and the U.S. becomes more energy independent, investors should look to North American operations for exposure to the oil and gas.